Archive for the 'Music' Category

Well that was expensive. I burned through a set of disc pads, put a hole in the side of my shoe and to top it all off, I somehow punctured my camelbak’s bladder. That’s a comfortable feeling, let me tell you. A slow but steady stream of ice-cold water running down the centre of your back until… well, you can guess where it goes from there. Then there was the unceasing headwind which somehow faced me no matter which direction I rode.

Despite all that, I had a bucketload of fun. I rode trails I’d not ridden in ages. I discovered an enchanted cottage hidden in the woods. I had a bleating match with a freshly shorn sheep. I blasted down the sides of fields, along fire-roads and though twisting technical singletrack. I sprinted up climbs with Rage Against The Machine shouting through my earphones.

I got home feeling better than I did when I left, and that’s what it’s all about.

Tim and I drove down to Lai’s flat in London on Saturday morning. After faffing around for a while, we jumped on the magic 137 bus which took us straight to Hyde Park. We bought slightly limp burgers, then wandered in through the gates to Hyde Park Calling. We sat on the Pepsi inflatable sofas and relaxed in the sun until the music started.

Rushmore opened proceedings on the Pepsi stage. They were great — clearly enjoying their moment. Their biggest cheer came when they covered the theme to The Littlest Hobo. Their bassist apparently has three nipples. Tim had to go one better with four.

That done, we wandered around to the main stage and there we stayed. First up were Forever Like Red. They didn’t seem to want to be there. Pity really — the music is alright, a less polished Muse if you will.

Next up were Ghosts, who were definitely up for it: Don’t be at all surprised if they’re the next big thing. They were a great act, really whipping the crowd up. I’ve since grabbed a copy of their album “The World is Outside” — it’s really bloody good.

I can’t really say the same about The Feeling‘s first album. It’s nice enough I guess, but it just didn’t float my boat. As a live act though, they’re an entirely different proposition. Who knew they could rock out like that? They played the same songs, but they were both louder and heavier. Consider my mind well and truly changed.

I didn’t think I’d ever get to see Crowded House, but they recently reformed. Bonus! They were just as polished as you’d expect and they really seemed to be having fun on stage. They started out with all the classics, which really got the crowd going, before moving onto their new material. Sadly we didn’t get to hear much of that: They brought the weather with them (sorry).

The skies darkened ominously and then the rains came. Not just a light shower – we’d had a few of those already. This was a full on monsoon. Up went a sea of umbrellas but we were all drenched already. It didn’t dampen anyone’s enthusiasm at all; Hyde Park just turned into a great big rainy party. Crowded House tried to play on, but the rain got so hard they had to give up.

Somewhere in the excitement Tim managed to give himself Mallet Finger, which wasn’t altogether clever. It’s only a minor injury, but it’ll keep him off his bike for at least six weeks, which is rubbish.

Last up was Peter Gabriel, complete with his Ming the Merciless goatee. He started off slowly, doing some of his more atmospheric numbers. I wasn’t wildly impressed with those to be honest (it didn’t help that I didn’t know them), but the man is a great showman and kept the crowd going. He finished off with a few hits that I did know, Steam and Sledgehammer being the ones that spring to mind. They were a great way to finish the day.

And with that it was all over. We wandered out of the park, leaving behind a sea of mud and abandoned Tuborg beer cups. We jumped back on the magic 137 bus and rode it back to Battersea, where we dined in a small Thai restaurant. the food was hot in every sense and was exactly what we needed after the drenching we got earlier.

A big shout out to the randoms we befriended – Sam, Kate and Anca (If I’ve remembered correctly), and a very big thank-you to Tim and Lai for putting me up at their flat and taking me out for a yummy Dim Sum lunch on Sunday. I’ve put some cameraphone pics up on Flickr.

Connect Player or SonicStage? Not even Sony know…

They appear to have two pieces of music management software competing for the same space. There’s SonicStage, which came with MiniDiscs and the HD series of players. It’s ugly and horrible to use but had the massive advantage of being fairly stable. Then they’ve got the new upstart, Connect Player, which comes with the new A-series Walkmans (Walkmen?). It’s both prettier and easier to use, but until recently was horribly slow and crashed every few seconds. I’ll ignore the third option, which I believe shipped with the PSP.

The thing is, they’ve finally got the Connect Player working as it should. It’s not perfect, but it works properly. Hooray! But now SonicStage is about to trump it again, adding support for the very Walkmans that Connect was designed to work with.

Come on Sony, make your minds up. What’s it to be? Connect Player or SonicStage? It was good to keep SonicStage around while you got Connect Player into a usable state, but surely now you should drop it? If you do keep developing it, it needs a major interface upgrade at the very least. It still looks and feels like some “scene” software from the heyday of the Amiga A500.

Maybe I’ve been spoilt by the likes of iTunes — software that makes it easy to look after thousands of songs — but then so has the rest of the world. I think Sony need to think long and hard, then cull one of these applications and bring the other one up to spec.

Update — It seems that the Connect Player is no more. Let’s hope SonicStage gets an interface upgrade in the next version, because even version 4.0 is miles behind the competition.

Sony’s Connect Player is back on track 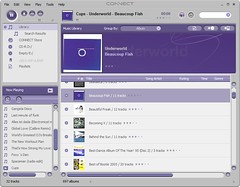 Sony recently updated their Connect Player software (to version 1.0.04.16100) and I’m very glad to report that it’s a huge, huge improvement. It now runs at a decent speed on my fairly modest Athlon 1800+ system and appears to be stable. Nice one Sony.

The new version wouldn’t start at first though – it just hung at the “Initialising Library” stage. The fix was fairly simple: I went to C:\Documents and Settings\All Users\Application Data\Sony Corporation\CONNECT Player\Library (the path may be slightly different on your machine) and deleted everything in there. Once I did that, it started up with an empty library just fine.

From there, I went to File > Import Files... and pointed it at my iTunes music folder. It picked up everything (all 36.6gb of it) and imported it fairly quickly.

Alas Connect Player went the same way as SonicStage and imported each track in my various-artists compilations as a separate album. A bit of trial and error found a fairly easy way to correct this:

Right, now for the one thing I’ve not tried yet: Syncing it up with my Walkman. Wish me luck…

So then, the Sony Walkman NW-A3000. It’s a lovely machine in many ways. It’s beautifully made as you would expect from Sony. The sound quality is fantastic too, once you’ve purchased some decent earphones. The supplied ones really aren’t too hot.

Unfortunately, a few things let it down, so I’ve put together a wishlist of things I’d like to see improved:

To be honest, there isn’t a great deal wrong with the Walkman itself. The majority of the problems lie in the software that sits on your PC. I do have a few bugbears though:

I bought myself a Sony Walkman A3000 shortly before christmas.

It’s a really good bit of hardware: The sound quality is great (especially with a decent set of earphones), looks lovely, is nice to use, line-out mode is handy for plugging it into the stereo, I could go on.

Alas Sony have largely ruined it. How? Well, they’ve gone and bundled it with the wonderful new Connect Player v1.0.

Now, to look at it’s quite nice. All dark colours and smooth edges – very Sony. Alas to use it is a complete nightmare.

It uses up shedloads of memory and CPU time (how does 674mb and 97% sound?). It takes upwards of five minutes to start up. Despite using all that memory and CPU time it’s slower than a snail climbing Everest. On top of all this it’s not even stable: It usually crashes when you try to import a lot of music at once. Nope, I wouldn’t reccomend that anybody even tries to use it.

Instead, march straight over to the Sony Website, grab a copy of SonicStage 3.3 and use that instead. In terms of looks it’s the complete antithesis of Connect – being an ugly thing. On the other hand, it’s loads faster, a lot more stable, uses less memory and will quite happily transfer music over to your new player.

Alas this means you’ll lose some of the extra functions of the Walkman (the Artist Link and some of the intelligent shuffle features), but to be honest I don’t think you’ll miss them. The joy of being able to finally put music onto the new player without tearing out your hair ought to more than make up for it.

YOU NEED TO SORT YOUR BLOODY SOFTWARE OUT, SONY!

Thankfully, it looks like they’re making steps in the right direction. ATRACLife reports that they’re taking a leaf right out of Apple’s book (quite literally) by poaching Tim Schaaff and making him Senior Vice President of Software Development. Still, that doesn’t help those of us using the software right now…

I want a music player with a gert big hard drive in it again. I’ve seen the adverts for the new Sony Walkman and really really want one. Or at least I did.

You see, I wandered over to Amazon to see how much they are. Not a lot more than an iPod Nano and 16gb bigger! It looks ace!

Then I started reading the user reviews. Everybody seems to think the player itself is fantastic – which is no surprise. Sony have traditionally been the daddies when it comes to portable music hardware.

Unfortunately, it would seem that software is not their strong point. Phrases like “the Connect software does its best to wreck your PC and prevents you loading any more than a handful of albums” kept popping up. I googled around for some more reviews and the same thing comes up over and over again. One review summed it up:

“It’s the broken software that lets this product down, not the player – it’s such a shame that Sony haven’t been able to get it right. They’ve put so much effort into getting a great MP3 player out for Christmas – and they’ve forgotten to finish the software.”

All these things rock:

You are currently browsing the archives for the Music category.