Archive for the 'Apple' Category

I’m sat here with the Macbook on my lap. It’s still a brilliant machine more than two years later.

Well, it’s brilliant except for all the cables. Right now I’ve got the power cable attached, the ipod plugged in, another wire going off to my camera, then there’s the backup drive and a pair of earphones. I’m using a portable computer but I’m tied down by all of the peripherals.

Now, imagine if you could dock your ipod to a hub over there on the shelf and have the laptop talk to it wirelessly. It’d be ace, especially if your phone, camera, GPS, external drives and all the other gubbins could sit over there with it.

The thing is, most of these things can connect via the USB ports on the side of the Mac. If only there was a wireless USB standard and products by the likes of Belkin and DLink which could do exactly that… Awesome stuff, except for the distinct lack of Mac support. Damn and blast and buggrit!

So what do I really want to see from tomorrow’s Apple Notebook event? An even faster Macbook would be nice, especially if it had Wireless USB built right in.

Thank-you for your latest marketing e-mail. It does a very good job of making the new MacBook into a tempting proposition.

The thing is, I’ve already got one. You must be aware of this, because I had to register it with you when I first switched it on! It’s a lovely thing, but I have absolutely no need for another one. It sounds like you’re struggling keep up with demand anyway.

Instead, why not try a different approach: Try and sell me something I might actually buy. Seeing as my Sony Walkman is presently all but useless with a Mac, persuade me to try an iPod. Hey, if I’m into music, maybe a decent set of speakers is in order, or an external hard drive to hold it all? You never know, perhaps I’d be up for buying some software to use on this thing – are there any good driving games on this platform?

But please, stop trying to sell me what you’ve already sold me. 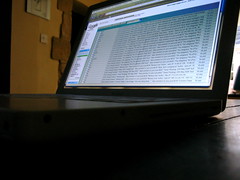 Well, perhaps it wasn’t entirely accidental, but I appear to have bought myself a new Apple MacBook.

So far it appears to be pretty lovely. Being used to a Windows machine, I’m still getting used to the slight keyboard odditites and lack of a right mouse button, but it’s proved to be a fairly easy transition so far.

I switched it on, filled in my details, chose a wireless network… and we’re done. Start up iTunes and within seconds I’m streaming music from the rest of the house. It’s a bucket full of aceness!

Right, what’s the text editor of choice out there? I’m used to TopStyle on the PC if that’s any help. Any other must-have software I need to download?

You are currently browsing the archives for the Apple category.