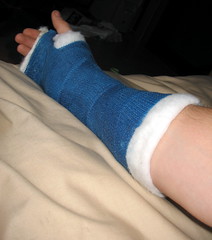 12 Responses to “A fetching shade of blue”

How long til ‘fell of bike’ becomes ‘fort off a bear’ ?

If you like I’ll operate on you instead. I have a bottle of TCP to fight of any infection so it can’t be too fraught with danger…

Hope you get better soon.

I have a rusty Stanley knife you can borrow, Weon

A bear you say? I saw a woman yesterday with a really cool adjustable plastic splint thing, they should really focus on making injuries more fun.

@Olly: Good news that they didn’t need to operate

Dude, Blue is So not your colour…

Can’t you get the old fashioned white plaster casts that everyone can sign and write abuse on anymore… :-)

Guess we just do it in here instead!

Looks lovely Olly. Good news about not needing an op :)

I think the blue is nice. It goes with your skin tone.

Mmm, though they did say it’s a very common boxing injury.