Archive for the 'Photo' Category

It’s amazing what happens when you’re on holiday for three weeks. You do so much that you start to forget things. I started looking through the photos this evening and it all started to come flooding back.

That awesome fountain in Kings Park. The DNA tower. The bikini photoshoot. The mental waitress and the Arsenal-supporting (HA-HA!) waiter from Islington. Waffles in Fremantle. The scary prison tour. The tandem on Rottnest Island. The supermonsterpatrolmeister 4×4 behemoth truck. The evil seagulls. The penguins. The only miserable aussie. The biggest ants ever. The steaming lake at sunrise. The trees you can walk through. Dôme. The high pitched receptionist. Owen’s crazy ladder tree – and the bonkers granny who went all the way to the top. Hardcore offroad driving (dude). Those amazing caves, and the guide who’d clearly spent too much time down there. Tales of the runaway “controlled” bush-fire (oops). The wine tour. The streak, ah, the steak. The road-trains. Getting up before sunrise to see the pinnacles. The sand-boarding. The snorkelling. The trek through death valley. The world’s biggest spider (except for that even bigger one). The stripey feet. The parrots. The reunion. Dim sung for breakfast. The booze run across the border to Kuala Lurah. Sushi. The crown prince, twice. The water village. The most ostentacious hotel on earth. The lagoon. The most apologetic staff in the world. The safe. Getting the bride. The wedding. The reception. The hangover. All-you-can-eat noodles. The goodbyes. The not wanting to come home, but being glad to be back. The passport with a nice selection of stamps.

…and that’s just scratching the surface. Man, we did everything! I’ve started uploading my photos to Flickr – there’s a whole set dedicated to them. 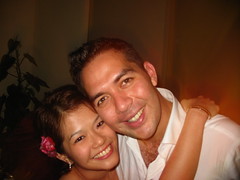 The day of the wedding. It started at Steve’s place in the morning, where he gathered all of his homies together. We all trooped in convoy over to Wei’s house where he (along with the rest of us) had to pass a variety of tests in order to get to the bride.

Once we’d got through that, we proceeded to the church for a traditional catholic wedding. It was a very nice service, in which Wei sang the psalm – very brave, but she carried it off perfectly.

The evening saw probably the biggest wedding reception ever, followed by a party at which certain people got ever so slightly inebriated. Great fun.

See more photos taken on 3rd June 2006, or all of my photos from Australia and Brunei.

[The very next day we headed for home. Alas I’d managed to pack my camera very well, so alas there are no photos of my hangover. Gutted.] 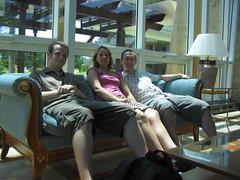 After a couple of days staying at Steve’s place, we transferred to The Empire, which is possibly the most ostentacious hotel I’ll ever stay in. It’s one of those places that you walk into and think “wow”.

The evening saw us head back to Steve’s for an evening send-off, which included us carrying a safe upstairs, drinking the first third of the secret beer-stash and comparing me to Kimi Raikkonen – I can’t remember who came off better…

See more photos taken on 2nd June 2006, or all of my photos from Australia and Brunei. 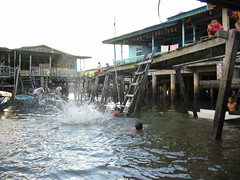 The last couple of days are just a blur of driving down one side of Australia, eating a massive steak and then flying over to Brunei: consequently I failed to take any photos at all.

Today was good though: After a slow start, we had a Japanese lunch at a well hidden restaurant in the centre of Bandar Seri Begawan, before Steve led us on a tourist tour of the city centre, taking in the military regalia museum and a boat-ride around the water village. Fantastic.

See more photos taken on 1st June 2006, or all of my photos from Australia and Brunei. 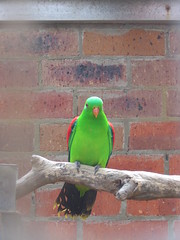 After yesterday’s walk through death valley, we decided to do something a bit more relaxed today. We visited the Rainbow Jungle Parrot Centre, just up the road from Kalbarri. The best bit was little tiny bird that saw a wasp fly in, turned around and pecked the little bugger clean in two. Ace!

See more photos taken on 28th May 2006, or all of my photos from Australia and Brunei. 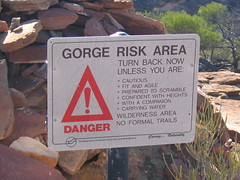 Turn back now unless you are:

See more photos taken on 27th May 2006, or all of my photos from Australia and Brunei. 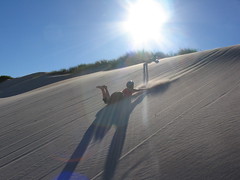 Irish Tanya and Anne sand-boarding near Kalbarri. It was ace fun – a lot like sledging, but without the getting wet, cold and miserable.

See more photos taken on 26th May 2006, or all of my photos from Australia and Brunei. 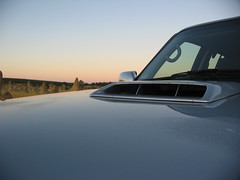 A view out over the bonnet of the beast (our Nissan Patrol 4×4), at the Pinnacles, near Cervantes. We got up very early indeed so we could see the sunrise over the rocks – it was well worth it.

See more photos taken on 25th May 2006, or all of my photos from Australia and Brunei.

You are currently browsing the archives for the Photo category.