Picture the scene: It’s the evening before the Megavalanche qualifier. We’ve all returned from a day of riding and a few of use are out on the balcony, fettling bikes. 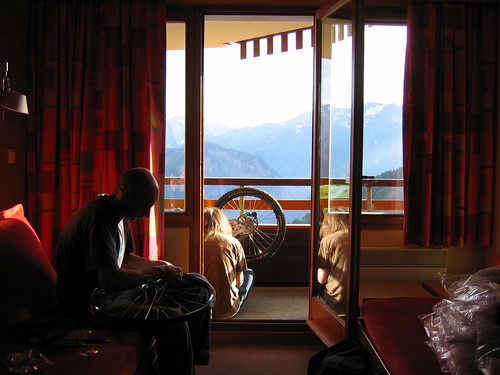 One of the guys staying on the floor above us leans over their balcony:

Excuse me, do you guys have a 7mm screwdriver?

Funnily enough, we don’t, but it’s not long before Brett‘s upstairs taking on the role of works mechanic and bleeding brakes for them. It turns out they were legendary downhill world cup racers Tommi and Pau Misser (now co-owners of the mighty Guak empire), who’d come to the mega with their mum. She was busy cooking them dinner and shouting at them every time there was any danger of grease going anywhere near the carpet. Brilliant.

Tommi went on to win his qualifier the following day, with Pau finishing fourth in his. Whether it was because they couldn’t stop, we may never know…

For us though, “Guak” took on a whole new meaning. It became the call of some sort of rare animal, and could be heard ringing out across alpine valleys for the next week and a bit. GUUAAAARRRK! GUUUAAAAARRRRRK!

You probably had to be there.

Good God (your God, i don’t have one) the Ollyguak is alive !! Where have you been hiding ?

What a view from the balcony!